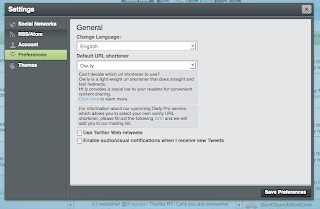 Okay so part two. While everyone else seemed thrilled to see HTML5 yesterday, I wasn’t like most waking up to a very different owl.

I didn’t have the time, I had 20 things on my plate and I was, as usual, trying to figure out how to cram 30 hours of work into about 17 waking hours.

I actually search topics and people talking about certain things and try to engage them in a conversation on twitter. Making their messages and ideas just as important (if not more important) than what I’m trying to sell.

So as I woke up ready to schedule a few retweets for the day that were actual interactions, not messages about my client’s product. I was looking for great things I could retweet that would be of interest to both my followers and engage those who are tweeting. To my utter stress levels hitting above the roof before 7 am, Hootsuite had removed the ability to:

Instead they wanted to do exactly what twitter.com does which was just send it out into the world! Ummmmmm last time I checked that’s why I don’t use twitter.com.

I didn’t have time to figure it out, but throughout the day I received other indicators that I wasn’t the only “moron” who thought this was a stupid idea.

By the time the whirl wind of activity died down for the day and I could sit and concentrate on a tool that was on autopilot for me, like breathing, before, I started to unravel the mystery by googling. (Thank god for google….but still really 15 or so minutes in my day to re-figure something out that I already didn’t have to think about is not a great addition to my stress levels)

I read people saying go into settings….well great I didn’t see where settings were anymore on my damn hootsuite. Weren’t they always at the bottom??? Google 5 more minutes….THE DAMN OWL! Sure it’s very intuitive when you have used a tool for a while one way, for you to just KNOW that you should click on the owl to find settings? Come on…was there a memo about this that I just missed when I opened my work station at 5:30am?

Okay so if you were like me and wanted to change back to “Classic” i.e. more user friendly, version of retweeting on Hootsuite you need to:

I know, I know I’m making a big deal out of this but I am of the mindset that if it ain’t broke don’t fix it. When I worked as a galley cook on a boat in the Cayman Islands the kitchen didn’t make sense to me I wanted to rearrange it. But there were 6 other crew members on the boat that knew exactly where everything lived. On a boat you quickly learn that everything goes back to the same place it came out of whether it’s a critical piece of equipment or a wooden spoon.

Stop rearranging things on social media if it isn’t necessary…Hootsuite, facebook, you know who you are.

If time is money (and it is) you can count on Leah for for prompt delivery. On time. Every time. Leah is the best-deadline oriented, and stays in cons… END_OF_DOCUMENT_TOKEN_TO_BE_REPLACED

Searching for the right home and knowing what it takes to own a home and what to look for can be quite overwhelming, especially if you are a first tim… END_OF_DOCUMENT_TOKEN_TO_BE_REPLACED

Leah is one of the few people that you will meet that is a results oriented person who walks the walk of what she says she’s going to do. Personal acc… END_OF_DOCUMENT_TOKEN_TO_BE_REPLACED

Leah thank you so much for everything you are doing. You have really brought a lot to the table. We appreciate your hard work and dedication. … END_OF_DOCUMENT_TOKEN_TO_BE_REPLACED

As scary as it was at the time, in hind sight I REALLY benefitted from the role playing near the very beginning of our training. It really helped me s… END_OF_DOCUMENT_TOKEN_TO_BE_REPLACED

I worked with Leah at Chesapeake Homes. She was the online sales consultant and I was a Realtor/Sales agent at the single family community in Suffolk,… END_OF_DOCUMENT_TOKEN_TO_BE_REPLACED

Leah is a talented, driven, self-starter with a wide variety of skill sets. She is an asset to any business, entrepreneur or individual seeking advice… END_OF_DOCUMENT_TOKEN_TO_BE_REPLACED

I highly recommend Leah Fellows, owner and trainer at Blue Gypsy Inc. She was instrumental in the implementation and success of our Online Sales Progr… END_OF_DOCUMENT_TOKEN_TO_BE_REPLACED

Leah was hired by Caruso Homes to help find a Online Sales Consultant and start our OSC program. She was there through out the process of hiring and t… END_OF_DOCUMENT_TOKEN_TO_BE_REPLACED