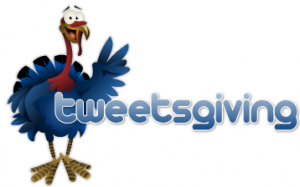 I can’t believe it was just one year ago that I was arranging Tweetsgiving in Virginia Beach with my friends Sonya Schweitzer and Karen Clements at Gordon Biersch. It was a wonderful evening of positive energy for an amazing cause to help build schools in Africa through Epic Change, a 501 (c) 3 organization, while giving thanks for all the things we have in life.

I’m grateful that we were able to be a part of building schools and libraries in Tanzania Africa last year.

This year has been a whirl wind. First starting Blue Gypsy Inc, then moving to Northern Virginia. Time flew by as I hopped back and forth between Hampton Roads and Northern Virginia while creating the Blue Gypsy Bluesfest. The Bluesfest is now moving in the direction to become an ongoing way to give back to Habitat for Humanity SHR and the Natchel’ Blues Network.

Now it’s already Thanksgiving again. This is a special time of year for me. Not only because it’s a time to reflect, give thanks, and be grateful for all the things I have in life, both relationships and the ability to achieve my goals, but also because it’s my father’s birthday. Dad’s birthday always falls somewhere on or near Thanksgiving. He’s been such a positive influence in my life, not just as my dad, but as my mentor.

Three years ago I started the tradition on my father’s 70th birthday of giving a nice donation to a worthy cause.

On his 70th I made a donation to the Food Bank so that other families could enjoy thanksgiving meals, something many of us sometimes take for granted. The growing number of people who are depending on the Food Bank in this current economy is staggering. To contribute to a Food Bank nearby you can go to Feeding America.

Last year for my father’s birthday I made a contribution to Epic Change, the organization who started the tweetsgiving initiative, a global celebration of gratitude and giving. Because of timing this year I wasn’t able to actively plan a tweetsgiving. If I were in Virginia Beach right now I’d be heading off this evening to the Geekette’s Fun’d’raiser. Sonya and Karen are planning an event tonight for both The Geekette’s Club, and for ForKids two amazing local non-profits helping women and children.

Just last week I was saying that I need to decide on an organization to make my annual donation to for my father’s birthday.

Isn’t it funny how things come into your life for a reason. I was at the airport looking for a book at a small news stand kiosk as I took off on my vacation to Dominican Republic. As usual nothing jumped out at me until I saw The Boy Who Harnessed the Wind. Recently I’d seen an interview with the author and knew it was the only thing on these shelves I had any interest in reading. This amazing triumph of the human spirit over adversity during famine and hardship in Malawi Africa reminds me how important my annual contributions are in honor of my father.

As I read about the true story of William Kamkwamba, and his struggles for education in Africa I know that I don’t just have to be a passive observer. There are so many ways that we can give back to help with education in Africa. Through Epic Change you can make a donation as I did last year to help build schools in Tanzania. There are so many more great organizations as well. Another charity I’d like to get involved with is Room to Read building schools across Africa and Asia. The Central Asia Institute is another powerful force in education across Pakistan and Afghanistan.

While trying to decide which charity to choose, I did a little bit more digging and now I’ve found this year’s cause to donate to for my father, Moving Windmills.

Moving Windmills Project supports Malawian-run rural economic development and education projects in Malawi, with the goals of community economic independence and self-sustainability; food, water and health security; and educational success. Moving Windmills Project is inspired by the story of William Kamkwamba, a remarkable young man from a remote village north of Malawi’s capital city. Forced to drop out of school due to lack of funds, William turned to self-education and, after seeing a picture of a windmill in a textbook, decided to build one to power his family’s home.

So now, in addition to making my Food Bank donation and my donation to Epic Change. I plan to make a donation to Moving Windmills as well.

Each small donation to any of these organizations is cumulative. There is none too small. It will all add to the whole which creates amazing changes for people.

I don’t need to re-create the wheel. I am thankful that there are so many organizations out there that give back. Perhaps my real mission is bringing all of those resources together in one place where people can all help create change.

Thanksgiving is always a great time of year to reflect on these ideas, and move forward. Okay now I’m off to go make a donation…or two….or three….in honor of my father.

Posted in Goals and Inspiration

If time is money (and it is) you can count on Leah for for prompt delivery. On time. Every time. Leah is the best-deadline oriented, and stays in cons… END_OF_DOCUMENT_TOKEN_TO_BE_REPLACED

Searching for the right home and knowing what it takes to own a home and what to look for can be quite overwhelming, especially if you are a first tim… END_OF_DOCUMENT_TOKEN_TO_BE_REPLACED

Leah is one of the few people that you will meet that is a results oriented person who walks the walk of what she says she’s going to do. Personal acc… END_OF_DOCUMENT_TOKEN_TO_BE_REPLACED

Leah thank you so much for everything you are doing. You have really brought a lot to the table. We appreciate your hard work and dedication. … END_OF_DOCUMENT_TOKEN_TO_BE_REPLACED

As scary as it was at the time, in hind sight I REALLY benefitted from the role playing near the very beginning of our training. It really helped me s… END_OF_DOCUMENT_TOKEN_TO_BE_REPLACED

I worked with Leah at Chesapeake Homes. She was the online sales consultant and I was a Realtor/Sales agent at the single family community in Suffolk,… END_OF_DOCUMENT_TOKEN_TO_BE_REPLACED

Leah is a talented, driven, self-starter with a wide variety of skill sets. She is an asset to any business, entrepreneur or individual seeking advice… END_OF_DOCUMENT_TOKEN_TO_BE_REPLACED

I highly recommend Leah Fellows, owner and trainer at Blue Gypsy Inc. She was instrumental in the implementation and success of our Online Sales Progr… END_OF_DOCUMENT_TOKEN_TO_BE_REPLACED

Leah was hired by Caruso Homes to help find a Online Sales Consultant and start our OSC program. She was there through out the process of hiring and t… END_OF_DOCUMENT_TOKEN_TO_BE_REPLACED