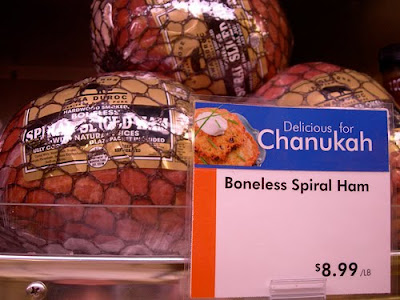 Today I opened up facebook and was greeted by this picture one of my friends posted. Hysterical—>

The tag line on it read: Dear Walmart, I think you are barking up the wrong tree. Love, The Jews.

This is a true case of not knowing your audience. And hopefully striking funny bones and not stepping on toes.

Being the unobservant Jew that I am, (while born Jewish, I have more Christmas lights on my house right now than Santa’s landing strip in the North Pole) I’m still culturally Jewish. I’m aware of most of the traditions, and things that are considered off limits in the Jewish religion…..ummmm ham is one of those things.

For anyone in the dark about this, ham numbers among the most identifiable “not kosher” things that exist. There are a myriad of Kosher laws, and we could get into a whole dissertation….but we won’t. However for most gentiles (those are non-Jews) unless you live under a rock you more than likely have heard something or another about Jews and ham not going together. It’s definitely not a peanut butter and jelly scenario.

The humorous irony this picture represented was enough to have me pushing the “share” button. Then I saw several other people re-post it on their walls, just as I had done earlier.

I began to think wow this thing is funny, it’s got the makings of something that could and would go viral. And as I thought about it, long after I posted it, I thought gosh, I really should look and make sure it’s not a hoax. Normally I’m on top of something like that if it’s political and sent by my mother.

If it’s humorous like this, it sometimes flies under my radar, and I don’t think to check it out for accuracy. I’ve been lulled by the fake Church Sign gag, or Catholic/Presbyterian Church Sign Wars. With that in mind I wanted to do my due diligence and check this one out.

Sooo I began my little research project on it. Here’s what I found:

So while funny, it’s old. The person who added the comment about Walmart starts to move it into the inaccurate arena. Will it eventually end up on Snopes.com Yep it already has. And it’s marked as true. (Check out the church sign wars on Snopes)

Hopefully no one takes offense to this post and just enjoys the humor in it, and remember it happened 3 years ago. I find it amazing that someone in a New York food store had no idea that ham was not Kosher. On that note, make sure you enjoy your Ham for Chanukah. Top it with cheese, it’s delicious.

Searching for the right home and knowing what it takes to own a home and what to look for can be quite overwhelming, especially if you are a first tim… END_OF_DOCUMENT_TOKEN_TO_BE_REPLACED

I have known Leah for about a year and a half. With her guidance, my company set up and hired for an Online Sales Counselor position, which has been v… END_OF_DOCUMENT_TOKEN_TO_BE_REPLACED

Leah was a joy to work with. She kept us updated throughout the training process and gave us updates on Lindsey’s progress. We have already noticed … END_OF_DOCUMENT_TOKEN_TO_BE_REPLACED

I worked with Leah at Chesapeake Homes. She was the online sales consultant and I was a Realtor/Sales agent at the single family community in Suffolk,… END_OF_DOCUMENT_TOKEN_TO_BE_REPLACED

Leah is a talented, driven, self-starter with a wide variety of skill sets. She is an asset to any business, entrepreneur or individual seeking advice… END_OF_DOCUMENT_TOKEN_TO_BE_REPLACED

Leah is a rare example of someone who can execute ideas – getting them from concept to reality and doing it with style. She has a great attitude, is… END_OF_DOCUMENT_TOKEN_TO_BE_REPLACED

I highly recommend Leah Fellows, owner and trainer at Blue Gypsy Inc. She was instrumental in the implementation and success of our Online Sales Progr… END_OF_DOCUMENT_TOKEN_TO_BE_REPLACED

Leah thank you so much for everything you are doing. You have really brought a lot to the table. We appreciate your hard work and dedication. … END_OF_DOCUMENT_TOKEN_TO_BE_REPLACED

I first met Leah when she was organizing a Blue’s Fest event in the Virginia Beach, VA area for a huge non-profit; and I was amazed at the energy she … END_OF_DOCUMENT_TOKEN_TO_BE_REPLACED

Leah was hired by Caruso Homes to help find a Online Sales Consultant and start our OSC program. She was there through out the process of hiring and t… END_OF_DOCUMENT_TOKEN_TO_BE_REPLACED