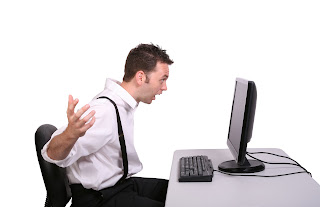 What are your thoughts? Do you think that with the growth and popularity of facebook there is now something called facebook rage?

Yes I’ve coined this term myself…though I googled it and I found this in the Urban Dictionary: When a person getting angry at another person for interrupting their Facebook time…this isn’t what I’m talking about. Yes the bad sentence structure is in the urban dictionary. I’d have said when a person “gets” not “getting”.

But this is not the facebook rage I’m talking about. I’m talking about when you read stupid stuff and it gets you mad and then you experience the same feelings when some idiot cuts you off on the highway. (Yep I have road rage too) There’s so much stupid stuff out there. And it’s not just in your friends’ feeds, it’s in the way the news is reported as well.

So the article in question was about the routine fly around that the first lady’s plane had to make while they cleared another plane off the runway….really. All of a sudden “John” made it into an I must hate the Obama administration for thinking it was not news worthy.

But the fact is, that all the accounts I heard YESTERDAY was that this is routine, the first lady was never in danger, and the only reason it is making the news at all is because the first lady was on the plane. If they reported this every time it happened for us common folks on planes there would be a huge fear of flying.

Yes I don’t dispute the fact that there have been some near miss incidents lately and the FAA is under fire to take a look at how they are staffing air traffic controllers. But I think this is another case of the 24 hour news cycle making a mountain into a molehill.

But here’s where the facebook rage comes in. So “John” has his panties in a bunch. But then “Drew” writes, “To bad the president wasn’t on there and it crashed”…first off, someone should educate this man. Not just because of his poor sentence structure, and incorrect use of the word to, but also for the inappropriateness of his statement.

Just because you can say anything on facebook, doesn’t mean you should. It’s these kinds of things that start to get people inflamed. Hence facebook rage.

If time is money (and it is) you can count on Leah for for prompt delivery. On time. Every time. Leah is the best-deadline oriented, and stays in cons… END_OF_DOCUMENT_TOKEN_TO_BE_REPLACED

Searching for the right home and knowing what it takes to own a home and what to look for can be quite overwhelming, especially if you are a first tim… END_OF_DOCUMENT_TOKEN_TO_BE_REPLACED

Leah is one of the few people that you will meet that is a results oriented person who walks the walk of what she says she’s going to do. Personal acc… END_OF_DOCUMENT_TOKEN_TO_BE_REPLACED

Leah thank you so much for everything you are doing. You have really brought a lot to the table. We appreciate your hard work and dedication. … END_OF_DOCUMENT_TOKEN_TO_BE_REPLACED

As scary as it was at the time, in hind sight I REALLY benefitted from the role playing near the very beginning of our training. It really helped me s… END_OF_DOCUMENT_TOKEN_TO_BE_REPLACED

I worked with Leah at Chesapeake Homes. She was the online sales consultant and I was a Realtor/Sales agent at the single family community in Suffolk,… END_OF_DOCUMENT_TOKEN_TO_BE_REPLACED

Leah is a talented, driven, self-starter with a wide variety of skill sets. She is an asset to any business, entrepreneur or individual seeking advice… END_OF_DOCUMENT_TOKEN_TO_BE_REPLACED

I highly recommend Leah Fellows, owner and trainer at Blue Gypsy Inc. She was instrumental in the implementation and success of our Online Sales Progr… END_OF_DOCUMENT_TOKEN_TO_BE_REPLACED

Leah was hired by Caruso Homes to help find a Online Sales Consultant and start our OSC program. She was there through out the process of hiring and t… END_OF_DOCUMENT_TOKEN_TO_BE_REPLACED