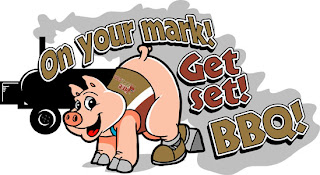 Most muli-band venues become a battle of the bands! Well how about we enjoy the bands, they get along fine, no need to fight… but instead we have a Battle of the BBQ? That’s right “Battle of the BBQ” is on. Now I just need to get the restaurants to comply!

Since we’re having the Bluesfest at Hunt Club Farm in Virginia Beach, an open airy atmosphere where we can let our hair down, bring in the beer trucks and enjoy the Blues, I was trying to come up with just the right food for the event. A BBQ just seems appropriate for a party on the farm. But remember, this is for charity folks. Habitat for Humanity of South Hampton Roads and Nachel’ Blues Network dedicated to the preservation of the Blues in Hampton Roads will be receiving 50% of the proceeds from the event.

In order to try to get as much money as possible to the charities I’d like to put a challenge out there to local restaurants that feature BBQ on their menus. I’d like to invite you to tantalize us with your tastes, razzle dazzle us with your ribs, roast your pigs, pour on the potato salad – bring it on! The more the merrier! And I know your BBQ expertise will complement the amazing talents of our bands: Bobby “BlackHat” Walters, Jackie Scott & the Housewreckers, and the Michael Clark Band. Three local favorites and help us draw in the crowds on September 25ht at Hunt Club Farm.

We’ll feature each restaurant who participates in the event on our website, in our advertising, and anywhere else we can get your name out…we’re hoping for some radio and magazine coverage as well. And of course we’ll write blogs about you and tweet about you from @bluegypsyinc and @gypsealeah. You just bring the food.

Our judges will be comprised of our top level sponsors, who will also be featured in the “Battle of the BBQ” and any advertising associated with our savory competition.

So bring it on BBQ Masters in Hampton Roads! Contact me at leahATbluegpsyincDOTcom if you want to be involved in this great event for charity and our “Battle of the BBQ!”

Leah is an excellent online consultant because she is personable, dedicated and puts her heart into what ever it is she wants to accomplish. I knew if… END_OF_DOCUMENT_TOKEN_TO_BE_REPLACED

As scary as it was at the time, in hind sight I REALLY benefitted from the role playing near the very beginning of our training. It really helped me s… END_OF_DOCUMENT_TOKEN_TO_BE_REPLACED

Leah was hired by Caruso Homes to help find a Online Sales Consultant and start our OSC program. She was there through out the process of hiring and t… END_OF_DOCUMENT_TOKEN_TO_BE_REPLACED

Top qualities: Personable, Expert, High Integrity We are only on the first steps of our journey together and already I can tell what a pleasure it … END_OF_DOCUMENT_TOKEN_TO_BE_REPLACED

I highly recommend Leah Fellows, owner and trainer at Blue Gypsy Inc. She was instrumental in the implementation and success of our Online Sales Progr… END_OF_DOCUMENT_TOKEN_TO_BE_REPLACED

I worked closely with Leah when I was the preferred lender for three Chesapeake Homes communities in the Hampton Roads area. Leah would normally be th… END_OF_DOCUMENT_TOKEN_TO_BE_REPLACED

Leah is a rare example of someone who can execute ideas – getting them from concept to reality and doing it with style. She has a great attitude, is… END_OF_DOCUMENT_TOKEN_TO_BE_REPLACED

I first met Leah when she was organizing a Blue’s Fest event in the Virginia Beach, VA area for a huge non-profit; and I was amazed at the energy she … END_OF_DOCUMENT_TOKEN_TO_BE_REPLACED

When we found out we’d be relocating to Virginia, we immediately started looking at homes online. We found a few we liked, but their locations weren… END_OF_DOCUMENT_TOKEN_TO_BE_REPLACED