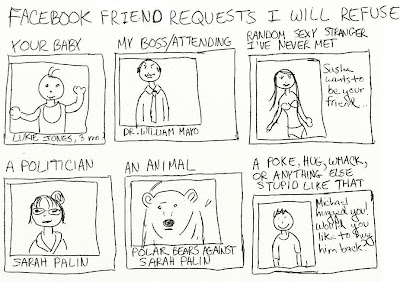 When I was a kid I liked to pull things apart and see how they worked. That meant that I had stuffed animals that had their little sound makers taken out of them, and ballerina music boxes that no longer played swan lake.

I just like to know what makes things (And people) tick.

One of the things that makes me go hmmmm the most in Social Media, is the random friend requests from complete strangers who don’t explain themselves. I understand that many people use facebook for social networking…I do too. But when I come across someone I want to know, who I haven’t met before, or even someone I’ve met in person at a social networking event…99% of the time I put a little personal note in letting them know how they know me, why I know them, or why I’d like to connect with them.

I think this is a common courtesy.

You don’t just walk up to a stranger on the bus and say I’d like access to personal information about you, just because. That’s kind of what you are doing when you request someone’s friendship on facebook with out explaining why.

However sometimes I just go ahead and accept people’s friendships as I did recently. At the beginning of the day a request came in from someone who knew 4 other people I did….. By the end of the day this person was friends with 30 people I knew.

And already I’d received an annoying gaming request, something equivalent to Farmville.

So I decided to do some dissecting. I sent a private message.

So XXXXX, today you sent me a friend request, and I refrained from asking why? I often do wonder why people randomly send friend requests to total strangers with no explanation.

Throughout the day you’ve gone from knowing 4 other people I know to now 30…..all I can tell from your profile is that you like playing games on fb…and in fact sent me some kind of game request….(which by the way I don’t play online games on fb)

Just trying to understand the point of your amassing of friends on fb. Would love some insight. I find it interesting and would love to get a little idea about it.

The only reply: The more friends on FB, the more to share gaming with. I take it you don’t play games.

Okay to me that’s just annoying then, you just want to play anonymous games with people, really that’s why you are randomly asking to be friends? So I sent the following reply.

No actually I don’t game, and the interesting thing is, that as I see the people you’ve friended, half of them are busy business people, or social media and marketing people that I suspect do not have the time to game on fb either, and about a quarter of them are businesses that also don’t play games online. So I’m curious how you choose whom you are going to send friend requests to.

I’m a firm believer in using facebook as a social networking tool for business and that’s why I sometimes accept the friend requests of people I don’t know.

Do you think you’d be more likely to get people that will be of the same mindset you are for using facebook if you were to put in the friend request field that you are interested in gaming and if they are too then you’d like to be friends?

And the reply…. a typed: no reply, please don’t reply back.

Oh I’m sorry I think I hurt the gamers feelings with a logical question. I don’t think my question was rude, and after all, the dialogue was opened when the request was sent from the other side. If I’m going to be bombarded with game requests, I will return in kind by bombarding with questions to understand this human’s reasoning. Was I prying into this person’s privacy with my questions? Was questioning their reasons wrong?

Why do you request a stranger’s friendship on facebook? And do you think it’s necessary or even desirable to tell people why you want to be friends? Really just like with the gamer, I’m curious.

Leah is an excellent online consultant because she is personable, dedicated and puts her heart into what ever it is she wants to accomplish. I knew if… END_OF_DOCUMENT_TOKEN_TO_BE_REPLACED

Leah was hired by Caruso Homes to help find a Online Sales Consultant and start our OSC program. She was there through out the process of hiring and t… END_OF_DOCUMENT_TOKEN_TO_BE_REPLACED

Leah is very experienced and have great ideas that help our events succeed I recommend Leah for marketing and social media experience, her personality… END_OF_DOCUMENT_TOKEN_TO_BE_REPLACED

I highly recommend Leah Fellows, owner and trainer at Blue Gypsy Inc. She was instrumental in the implementation and success of our Online Sales Progr… END_OF_DOCUMENT_TOKEN_TO_BE_REPLACED

I worked closely with Leah when I was the preferred lender for three Chesapeake Homes communities in the Hampton Roads area. Leah would normally be th… END_OF_DOCUMENT_TOKEN_TO_BE_REPLACED

As scary as it was at the time, in hind sight I REALLY benefitted from the role playing near the very beginning of our training. It really helped me s… END_OF_DOCUMENT_TOKEN_TO_BE_REPLACED

I have known Leah for about a year and a half. With her guidance, my company set up and hired for an Online Sales Counselor position, which has been v… END_OF_DOCUMENT_TOKEN_TO_BE_REPLACED

I have worked with Leah on a few projects and find her to be very efficient and detail oriented. Leah is the type of person that gets things done and … END_OF_DOCUMENT_TOKEN_TO_BE_REPLACED

Leah thank you so much for everything you are doing. You have really brought a lot to the table. We appreciate your hard work and dedication. … END_OF_DOCUMENT_TOKEN_TO_BE_REPLACED

Searching for the right home and knowing what it takes to own a home and what to look for can be quite overwhelming, especially if you are a first tim… END_OF_DOCUMENT_TOKEN_TO_BE_REPLACED