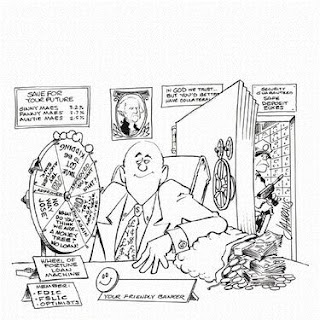 I experienced a social media triumph the other day. It just goes to show Social Media can really get the job done. Especially if a big business is doing its job and monitoring its online reputation. In that case you might even get positive results.

I did last week!

A couple of weeks ago I walked into my bank to open another business account, in the course of my transaction with the banker who was helping me, she asked me if I wanted to open a business charge card. Since this had been one of the many items on my list of things to do, I said, “Sure, why not.” She explained to me with the tightening of banking rules I wouldn’t get an approval on the spot.

That’s fine. I wasn’t concerned, between my excellent credit rating and my long history with the bank I didn’t think it would be a problem.

Two days later all hell broke loose. I got a call from my bank. The same bank I’ve been using for 22 years and have had savings, checking, credit cards and business accounts with. They informed me that if I wanted a business credit line, they would take $5000 from my personal credit and, oh by the way, “you have far more credit than we think you should have right now so we are going to cut your credit down in less than half.”

In 22 years, I’ve never had a late payment, in 22 years they are the ones who had given me nearly credit line increase upon increase for being such a secure risk. I barely carry a balance and I have a credit score near the 800’s. So now, now when I’ve just started my own business and may actually need to use some of that credit, sparingly of course, you want to decrease my credit? (It was the principle of the matter that made me angry.)

Here the bank was, making a blanket call instead of looking at each case individually. This same bank almost single-handedly put many builders out of business by pulling their credit lines because of a blanket determination that it was all too risky to be involved in the building industry. They did this, of course, after contract were written. By denying the builds, the sales didn’t happen. In essence the bank created a self full filling prophecy.

I said, “Thank you very much, I don’t ‘need’ the business credit card, you can just leave my credit line right where it is.”

“Oh no,” the voice on the other end of the line said, “I’m sorry that’s not possible, it’s now policy to reduce down your credit line.” At this point I turned from the polite person I usually am on the phone to….well….lets just say I wasn’t green but you wouldn’t like me very much when I’m angry. I tersely asked for a supervisor and of course there was none to be had. I was informed the supervisor would get back to me with in 48 hours.

48 hours??? Are you kidding me? What terrible customer service!

So of course, I broadcast my frustration over facebook first. I expressed how pissed off I was at this particular bank, and then elaborated that I was ready to pull all 6 of my accounts. In a matter of minutes I received 20 comments agreeing with me that they are the worst bank out there.

I then tweeted the same thing. Then went one step further and tweeted: (bank) if you do any social media monitoring and care what a customer of 22 years has to say, then step up.

In less than an hour I got a tweet from their “help” department. I DM’d them my displeasure. When they asked for more personal details like phone, zip etc. I said all I want is for the supervisor to call me back, all that information should be in my account.

Less than an hour later I got a call from someone in the “Office of the CEO” at first I was thinking yeah right, anyone could look up my phone number with a little detective work and claim that. But he picked up the comments in my file and knew exactly what was going on. He proceeded to say that, “You of all people, working in the industry that you do, should understand what banks have been going through.” That was it, that set off the powder keg and I told him what I really though about their banking policies toward builders.

I tried to hold my temper as I told him how his bank was responsible for practically putting my former employer out of business, that while we could sell a home like nobody’s business, we couldn’t build the damn things because they pulled the credit lines.

I proceeded to chide them for lumping all building companies in with a host of other issues that on close consideration could have been sorted out by anyone with half a brain to see the bank was making a poor decision. On my soap box I told him, “But no one wants to think any more, no one wants to make decisions. It’s easier to just say ‘No.’ And that’s what you are doing without consideration for each individual.”

I was surprised. He immediately backed down and gave me what I wanted. I received a business credit line as well as had his assurance that they would not touch my personal credit line.

I was actually quite amazed. I achieved a minor victory through the power of Social Media. A regular “Supervisor” never would have had the authority this VP in the “Office of the CEO” had. And without my tweet I never would have reached that level.

If time is money (and it is) you can count on Leah for for prompt delivery. On time. Every time. Leah is the best-deadline oriented, and stays in cons… END_OF_DOCUMENT_TOKEN_TO_BE_REPLACED

Searching for the right home and knowing what it takes to own a home and what to look for can be quite overwhelming, especially if you are a first tim… END_OF_DOCUMENT_TOKEN_TO_BE_REPLACED

Leah is one of the few people that you will meet that is a results oriented person who walks the walk of what she says she’s going to do. Personal acc… END_OF_DOCUMENT_TOKEN_TO_BE_REPLACED

Leah thank you so much for everything you are doing. You have really brought a lot to the table. We appreciate your hard work and dedication. … END_OF_DOCUMENT_TOKEN_TO_BE_REPLACED

As scary as it was at the time, in hind sight I REALLY benefitted from the role playing near the very beginning of our training. It really helped me s… END_OF_DOCUMENT_TOKEN_TO_BE_REPLACED

I worked with Leah at Chesapeake Homes. She was the online sales consultant and I was a Realtor/Sales agent at the single family community in Suffolk,… END_OF_DOCUMENT_TOKEN_TO_BE_REPLACED

Leah is a talented, driven, self-starter with a wide variety of skill sets. She is an asset to any business, entrepreneur or individual seeking advice… END_OF_DOCUMENT_TOKEN_TO_BE_REPLACED

I highly recommend Leah Fellows, owner and trainer at Blue Gypsy Inc. She was instrumental in the implementation and success of our Online Sales Progr… END_OF_DOCUMENT_TOKEN_TO_BE_REPLACED

Leah was hired by Caruso Homes to help find a Online Sales Consultant and start our OSC program. She was there through out the process of hiring and t… END_OF_DOCUMENT_TOKEN_TO_BE_REPLACED